Today’s post is based on my recent experience with drawing storyboards. Although I am not a skilled and experienced filmmaker (not just yet, but give me some time) I already appreciate how a storyboard can help make a film. Storyboard is a useful tool for directors, camera operators, screenplay writers, lighting technicians and probably all the other members of the filming crew. But for me, personally, it is a tool best used to clarify ideas.

Creating good storyboards is an art form in its own right. I am not claiming to be an artist. I use storyboards in all my projects and learning to draw is, for me, a natural progression. As I am completely self taught I often find it hard to correctly represent the camera angles and movement. But that is not the biggest issue. Whenever I start a new filing project I first imagine it. Then I draw what I’ve imagined. And there lies the biggest issue. Video camera is not like our eyes and certainly nothing like our ‘minds’s eye‘. Before you point a camera at your object it is hard to predict, at least not until you are an experienced camera operator, how the scene will look like through the lenses.

Take a look at that picture

It is a part of Film Noir project I am making for the University of Salford.

And this is the shot.

The character faces different direction. There is no wall behind him and not one, but many cars and light move in and out of the scene. The reason is simple. What I have imagined (some sort of a dark back alley, deserted, with a man standing in the shadow and a car waiting in the distance) could not be achieved at the time of filming. This location was a compromise but the outcome is much better than I expected.

And another storyboard scene: 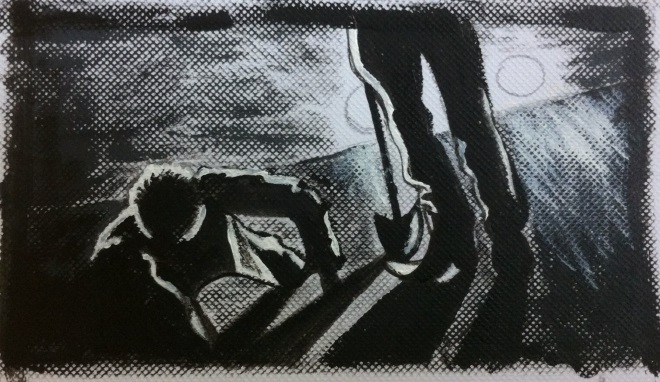 Here the idea was to film in complete darkness only illuminating the silhouettes of the characters. The scenes shows the bad guy forcing the good guy to dig a grave. Originally the space was supposed to be ambiguous for the viewer. Darkness all around would  make a closed space look like large open desert. And I almost managed to pull it off. But not quite. Two shots, from two different shooting days prove that no matter how low is the light there are still space clues that ruin the impression on ambiguity. 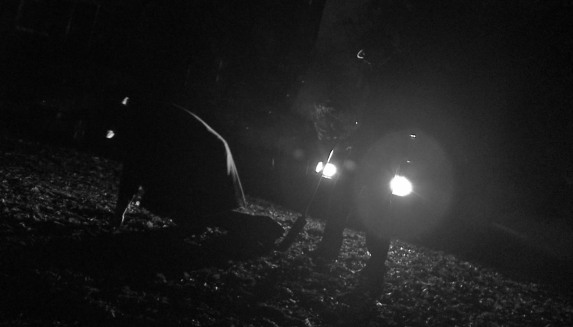 Why am I writing about it you might wonder…well, I thought that some of the nubbies out there might be struggling with similar issues. So this is my advise: make storyboards, but don’t always stick to them 100%. Try different things, improvise. Compromise.

Another way to make the storyboards work better for you is to draw from real locations. Plan the film by including pictures of places you will be shooting at. Make the pictures at the exact angles you plan to place the cameras during filming. Some people might find it to be a much more rewarding working style. I do. Sometimes. But not every project is the same. Sometimes I do enjoy the surprise, the challenge and the mystery of trying to shoot whatever is in my head. Yes, you save time by scouting for locations first and drawing storyboards later. But where is the fun in doing that?